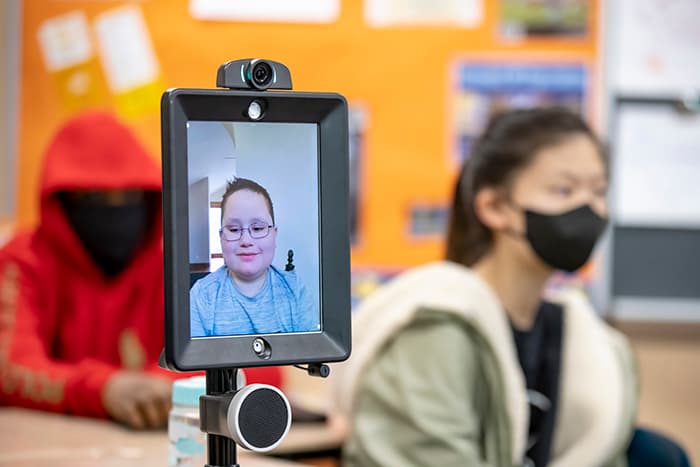 Ask around and you’ll find that most everyone at Ellicott Mills Middle School (EMMS) knows who Dylan is. And yet, Dylan has spent only a couple of weeks physically in the school building since he began there this fall.

In the summer of 2021, Dylan underwent chemotherapy and then had a bone marrow transplant that left him immuno-compromised. He spent the next several weeks at the National Institutes of Health (NIH). Once released, he returned to NIH twice a week to receive various treatments.

When the school year started, “Dylan was perfectly capable of participating in class and doing schoolwork,” explains his mother. “It just wasn’t safe for him to physically be in school.”

The situation called for a creative solution. HCPSS’ Home and Hospital Instruction team came up with just that, using a robot they call Rosie.

Rosie consists of a Segway that has an iPad attached to it via a telescopic pole. When Rosie is turned on and Dylan is connected to her at home, Dylan’s teacher and students in his class can see and hear him on the iPad, and he can see and hear them. By using remote controls at home, Dylan also can move Rosie around to navigate the school hallways and change classes with his peers. 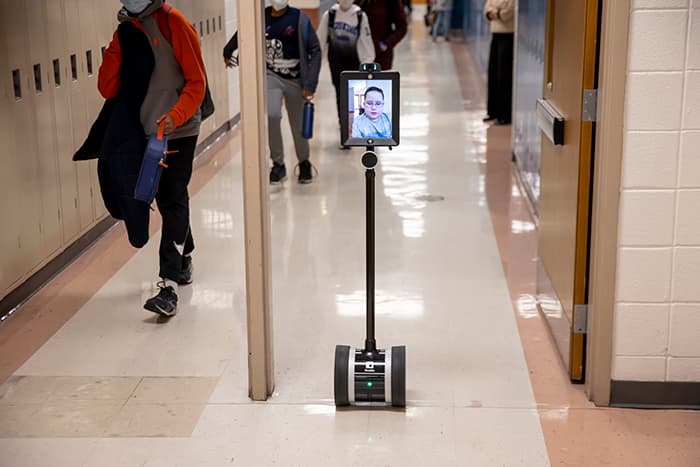 “It’s kind of like FaceTime,” explains Dylan’s mom. The difference is that Rosie’s design allows Dylan to move the Segway around, in many ways as if he were physically in class. He can move Rosie up if he wants to get his teacher’s attention or raise his hand, or he can move her down if he wants to be at the same level as his classmates while they work on a project together.

“It’s pretty cool,” says Rachel Schwaab, Dylan’s school counselor. “Kids see Rosie in the hallway and say ‘Hey, Dylan.’ They interact with him in much the same way as they would if they were standing right next to him.”

Dylan agrees. ”It’s so much better than virtual school, when I couldn’t really move around or talk to people as much. This way, I get to do most of the activities that my classmates do and I get to do it while being right there with them.”

The arrangement is not without its issues, however.

Getting his teacher’s attention, particularly when there is a lot of activity in the classroom; keeping Rosie fully charged; having a reliable internet connection; and addressing unexpected scheduling changes can all present challenges. 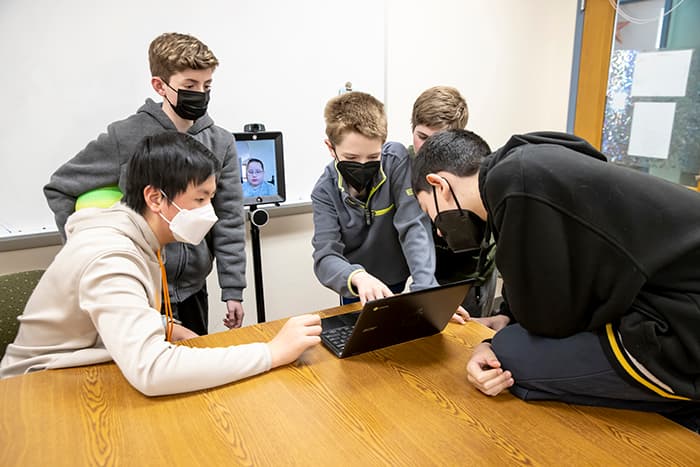 “It’s tricky if there’s a substitute teacher,” Dylan notes. “They don’t know the routine the way my regular teachers do, so that can make things harder for them and for me.”

Making sure that the technology is working properly—and that Dylan has access to all the resources he needs to fully participate in school—is a full-time job, his mother says, who has taken a leave of absence from her work to support Dylan at home.

“I am constantly texting back and forth with Ms. Schwaab and Dylan’s teachers to make sure we have everything we need. Sometimes, the texts are just about plugging Rosie in because she’s low on charge; other times, they’re about figuring out how to get materials home to Dylan so he can do a science lab or an art project with his peers,” she says

Dylan’s mom and Schwaab also communicate regularly about how Dylan is feeling socially and emotionally.

“As awesome as the robot technology is at helping Dylan be a part of his class, it’s not the same as him physically being there,” his mother says. “So, we check in a lot to make sure we’re working together to support him in all the ways he needs it.”

Schwaab has organized weekly lunch bunches with a group of Dylan’s classmates to give them an opportunity to “hang out and have fun” together. 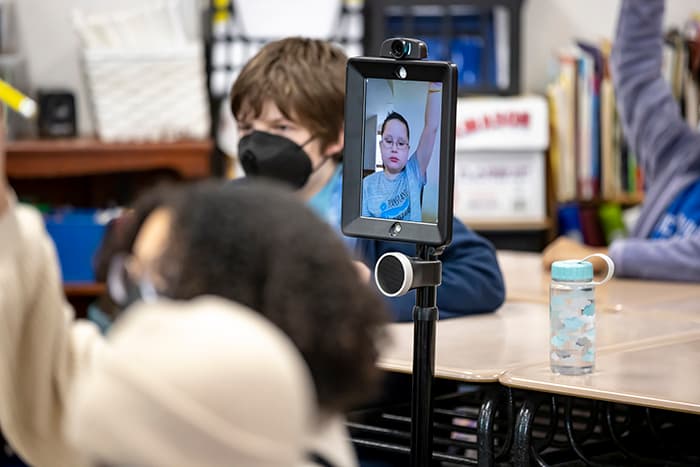 “They joke around and laugh just as they would if Dylan were sitting there with them,” Schwaab says.

“If I can’t get the teacher’s attention, or if Rosie’s charge is getting low, kids in my class will help by letting the teacher know I need something or by plugging Rosie in,” he says. “They also make sure to give me the space I need to move Rosie through the hallways, even when they’re crowded.”

“At the beginning of the year, I honestly wasn’t sure how it would go,” Dylan’s mom recalls. “Going from elementary to middle school is a big transition on its own. Not physically being there and relying on a robot added a whole other layer of complexity. But the EMMS community has been absolutely incredible, flexible, and accommodating–and Dylan has made great progress as a result.”

“Dylan has grown immensely this year. He’s become so much more independent and learned how to advocate for himself.” 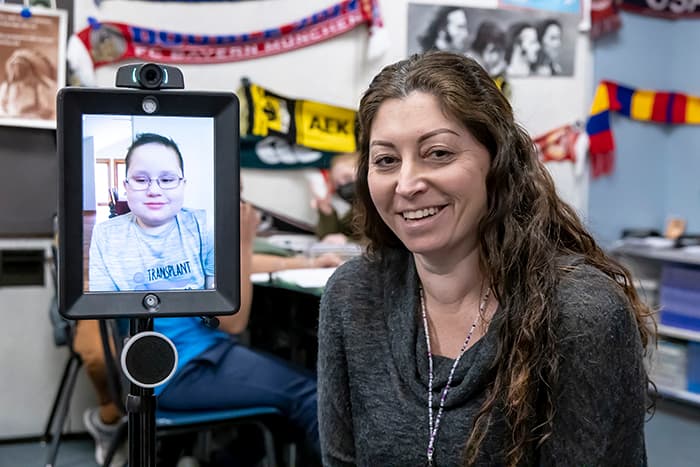 Dylan’s teachers also observe the success he has had in adapting to his unique circumstances and using Rosie to achieve academic success.

“Despite not physically being in the classroom, [Dylan] makes his presence known by participating in small group discussions, asking, and answering questions and contributing to small group activities. He does a great job completing his work assignments thoroughly and submitting them on time. I continue to be inspired by him and the way he has managed the challenges he had with his health,” says his health teacher, Cheryl Schuh. 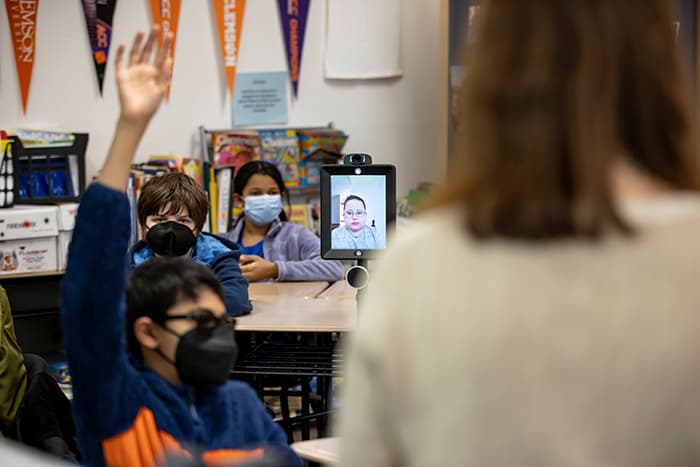 “Dylan is finding great success in class this year, and this is due a great deal to his use of Rosie,” says EMMS math teacher Stacey Spanier. “In this uniquely challenging experience, Rosie lets Dylan be just like the other students in so many important ways … I feel so privileged to have the opportunity to work with Dylan and Rosie. This technology allows me and my students to reach a student in ways we have never experienced before.”

Dylan himself feels fortunate to have had Rosie to help him this year, but notes that he is “mostly ready” to be physically back in school.

“It’ll definitely be different to walk through the halls and sit at a desk with my class again. But the good thing is that I already know where everything is, so that will make things a lot easier.” 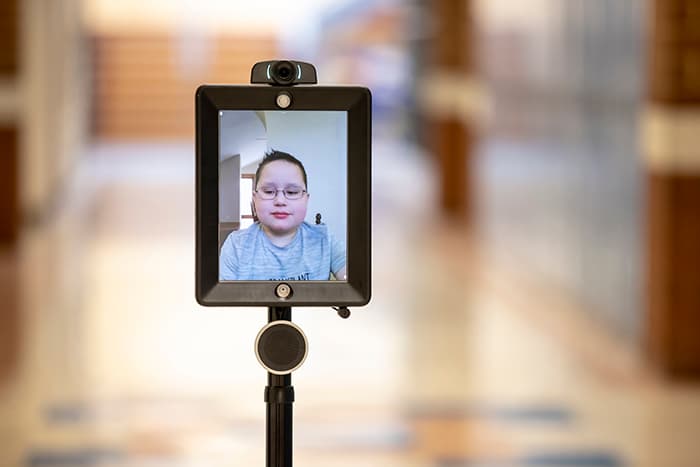 HCPSS Names 2022 Principal and Teachers of the Year »