The Maryland State Department of Education (MSDE) announced this morning that Clarksville Middle School is one of six Maryland public schools to receive the State’s Blue Ribbon award for 2018-2019. The school was also recognized with this honor in 2005-2006, and as a National Blue Ribbon School in 2006. 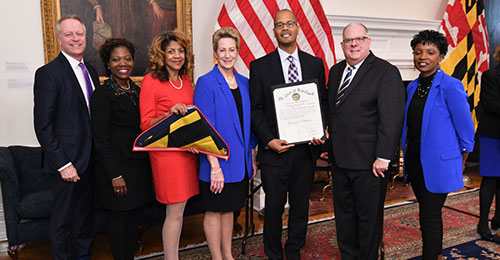 The Blue Ribbon Schools Program is a state and national program that recognizes and honors schools that exhibit high performance and/or significant improvement in reading and mathematics achievement as measured by Maryland assessments.

Clarksville Middle School recently received a five out of five star rating from the new MSDE 2017-2018 School Report Card, which looks at factors such as academic achievement, rate of chronic absenteeism and access to a well-rounded curriculum. On state tests, 84.5 percent of Clarksville Middle School students scored as proficient or higher in math and 85.4 percent of students in English Language Arts.

“I’m incredibly proud of Clarksville Middle School and its staff for earning a Maryland Blue Ribbon award for a second time,” said Superintendent Michael J. Martirano. “Congratulations to the staff, parents and students for this recognition of their commitment to ensuring that every student thrives in an equitable learning environment.”

Maryland Blue Ribbon Schools go on to compete for National Blue Ribbon awards, which will be announced by the U.S. Department of Education next fall.