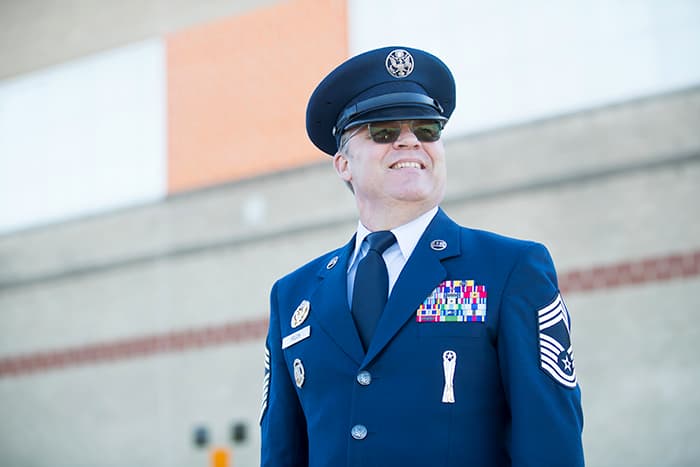 Chief Master Sergeant Donald Felch admits that his career path wasn’t a straight shot. He enlisted active duty upon graduating high school out of patriotism for his country, a legacy of Airmen in his family and feeling not quite ready for college. As he moved forward professionally, “a lot of it involved following my passion—looking at the potential path ahead of me,” Chief Felch said.

More than a decade into his service, he attended the Air Force’s largest noncommissioned officer academy to become a master sergeant. It was there he was inspired to quickly wrap up his bachelor’s degree—which took a total of 14 years to complete—so he could teach. Shortly thereafter, he became an instructor at the same academy. Later he received his MBA, and he proudly closed his 30-year career as a professional military education commandant, running the very academy that had ignited his teaching spark.

Then “three years ago, I found Oakland Mills Air Force JROTC [Junior Reserve Officer Training Corps] and discovered I could combine my love for developing young leaders with my military background and civilian education,” Chief Felch said. In his JROTC role, he teaches aerospace science and leadership classes; oversees afterschool activities, fitness training and field trips; and coaches students in the cadet-led programming.

JROTC is an elective class open to HCPSS high school students throughout the county, with no commitment to join the military. The program teaches citizenship, leadership and life skills— ranging from dress, finances, responsibility and politeness—that translate into success after high school. Additionally, students across all grades sit in the same classroom, so “cadets have a really broad and diverse interaction with kids in the school,” Chief Felch said.

In turn, Fink said: “Chief Felch goes above and beyond for all of his students. Chief Felch guides our students, and helps them develop into amazing leaders, learners, and most importantly, good people who care for others.”

Kiana Macharia, in the most senior student role as Oakland Mills JROTC’s cadet lieutenant colonel and corps commander, said: “Chief Felch leads fairly and equitably, providing a safe place for cadets to learn how to grow. He’s given me experiences to try and figure things out, so I can gain confidence. He wants us to be sure to give back to the community and use cadets’ strengths. Everything we’re doing now is preparing us to be valuable citizens.”

In his personal life, Chief Felch and his wife live in Edgewater, Maryland. He has three grown kids. He served as scoutmaster for eight years for his two sons, a role that helped prepare him to teach a citizenship program such as JROTC.